Herein lies a jumble of backstories and anecdotes pertaining to my work and the creation of my images. A few passages may even elicit a laugh or two. You've been warned.

After walking the tracks for some time, I came upon this scene at first light. The sun was just beginning to rise above the Cascade ...READ MORE....

I came close to being shot by an irate owner of the truck seen here. I had to convince him that not only was I not a vandal, but I wanted to "immortalize" his truck (a 1922 Ford classic) on film. ...READ MORE...

I posed a problem I needed to solve for myself. How do I create stars on the rails? The solution was quite simple, which is why it took me days to figure it out. ...READ MORE...

These images were created on film during the time of exposure. No effects filters, Photoshop or any digital computer programs were employed. 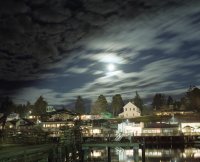 Robert Anthony DeFreest is a photographer of the stunningly beautiful night. Fog and full moon, glistening snow are sheer bliss to his senses. The hoot of the owl, rustle of the critter under fall leaves and, above all, the echo of a train’s horn in the distance create a scene that can only barely be senses in his photographs. What can be seen is as exciting as what’s beyond the light.

Robert watches the calendar and stakes his claim along Pacific Northwest railroad tracks on any evening with a full moon. The ambient light, coupled with a bare street lamp or a locomotive headlight, are glorious to his lens. The magic, though, has only begun to unfold. The real wonder happens when the film is developed.

Robert’s photographs are taken on medium format and 35 mm film, and they are developed the old fashioned way -- from negative to print. He never uses Photoshop or any digital photography tool. Long exposures and steady patience are the tricks of his trade.

“My goal is to create images on film which capture the solemnity and the haunting, isolated beauty of the night. These images are quiet meditations on forlorn locales and the effect weather has in creating mood pieces. Haunting rural and, especially, nocturnal railroad environments are a well spring of mood and atmosphere,” said DeFreest.

Robert is self taught in photography, though he comes from a background of theater and film. His constant experimentation is fueled by his imagination and creative spirit.

Though Robert’s work is still images, this darkness, both in appearance and in scene, makes its way into Robert’s photographs in a way that draws you in like these old films.

He doesn’t need digital effects to convey the solemnity of a place. Fog, rain, snow and the light of the moon create the arresting images.

“These locations abound with a mournful beauty and a peaceful solitude,” he said.

"Robert DeFreest's photography is breathtaking and sometimes haunting. His photos are results of long exposures created in the middle of the night, using site specific lighting from a train spotlight, or the floodlight of an adjacent building. You can find DeFreest in the cold fog of the early morning, alongside vacant historic railroad tracks, capturing large spans of scenery in all its emptiness. The finished photos highlight the sublime immensity of natural elements, superseding the modern structures within the landscapes. DeFreest's photography can be both mysterious and inspiring." Jody Thompson, Hadrian Stone Gallery.

"Robert DeFreest's art is about vision, concept, and painstaking execution. His visions are captured the old-fashion way, on film, and every aspect of every image you see arrived on that film at the time the photo was being taken. In this era of everything being tweaked in Photoshop, Robert's art and Robert's dedication are unique." Warren Carlson, author: Upper Skykomish Valley

Find Robert at these Events and Galleries

Due to Covid 19, there are currently no scheduled events.
Check here to find out what events you can find Robert at.