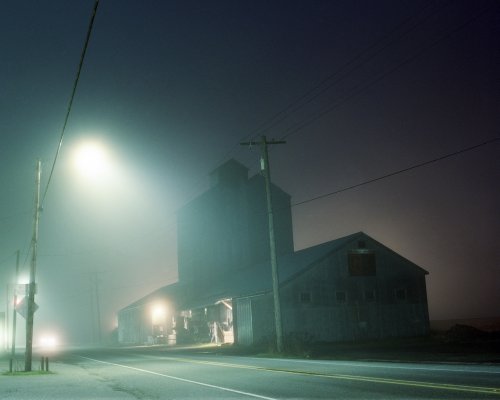 STALKING PREY is a homage to film noir, the films of Val Lewton and the great writers whose characters lived and flourished in the shadows.  This locale has haunted me for 18 months, during which time I tried unsuccessfully to create a pleasing moment in time, and always dissatisfied with some aspect of how the evening unfolded (no fog, not enough fog, operator error, etc.).  A freezing, humid night and a jug of cold and bitter coffee (just the way I like my women) makes for one determined photographer.  This 60 plus second exposure took over 3 hours to capture.  The first exposure was just to nab the car’s headlights emerging from the fog. Then I had to wait over 2 hours for a northbound freight train to pass behind the building in order for it to illuminate the fog and also add definition to the structure.  The lens was then closed as the train passed through the frame.  Then the real trick began as I had to open and close the lens for scant seconds in between all the cars darting by in both directions.  Actually, this 60 second exposure is the sum total of 15 mini exposures.