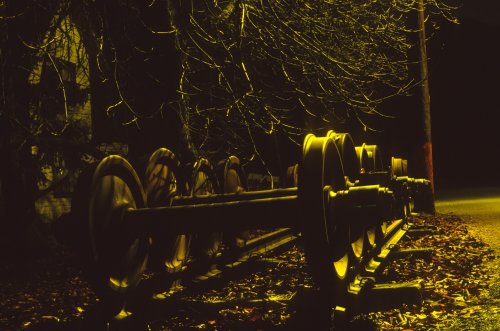 I was drawn to this scene due to my predilection for deep shadows and atmospheric lighting. The visual cues for me said "gothic" to a minor degree, hence the title.  I took advantage of an existing light source (a railway yard lamp) out of frame to the right which created a visually dramatic effect with the tree’s branches.   When photographing at night, I close down the lens' aperture which gives a greater depth of field.  This also means that the amount of light passing through the lens is restricted, requiring the aperture to remain open for a greater period of time. Another factor which adds to the long time exposures is that I do not care for my images to contain any grain whatsoever, therefore I photograph on slow film speeds, usually 100 ISO to 400 ISO.  This is not the norm for the majority of night photographers, especially those who can digitally produce images at 1,600 ISO and far greater.  This results in very few images being taken during any given evening.  I usually average ten or less exposed images per night.